Oceano Pics banned by Myspace- why? 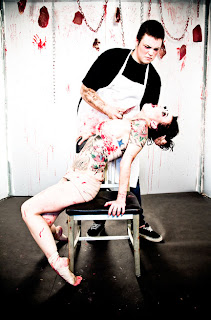 Question: Do you think the fallout surrounding OCEANO having myspace pics pulled has got a bit OTT? I mean regurgitate, cattle decapitation, General Surgery, Naked City have got away with far worse. Is it because american censor groups have a problem with anything that hints at sexual violence, although the pics dont show this, the coments that the guitar player gave about his conversation with the model do? How frequently does earache normally hit problems with fringe groups and promoters over artistic content? the police raid was over ten years ago havent we moved on! From:

Answer: If anyone missed the news, we arranged a photoshoot for our new Chicago heavyweight ultra-brutal deathcore titans OCEANO, and as usual we gave the band free rein to go as gory and brutal in the shoot as they liked..but the resulting pics- see above and below- were actually removed by Myspace as "innappropriate content" from both the bands Myspace page and their personal profiles.They were removed within 24 hours and i can only assume that Myspace must have a team of workers vetting images constantly, as they are no doubt concerned about the site being overrun with porn.
Earache hasn't known anything like this since Carcass gore covers in the 90's for which we had a Police raid but no charges.It needs to be pointed out that the band don't condone violence against women, the pics are a gore-fueled fantasy inspired by movies like Hostel and SAW..trouble is, on the internet, one mans gore-fueled fantasy is anothers "innappropriate content".

As you say, the heat & fallout is beginning to bite now-Heres what a club owner in KETTERING OH had to say about it:
"Subject:
August 23
Body:
Hey guys,
I just wanted to touch base with you about tomorrow's show at the Attic. I have been trying to get in touch with Devon who booked this show for a week, but I haven't gotten a response back yet. That being said I thought I would message you directly.

It has been brought to our attention in the past week or so that there were some images of the band that were banned from myspace. Because we are an all ages, family friendly venue we pride ourselves on providing a positive atmosphere for the kids that come in to see shows. Unfortunately, because of those images and the lyrics to the songs we have found there is no way you guys will be able to meet those guidelines. Again, I apologize for the late notice, we have been trying to get in touch with Devon but at this time we will not be able to allow you to take the stage tomorrow night" 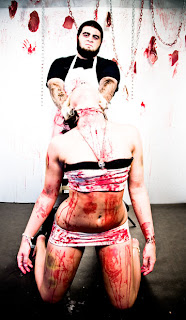 I think its easy to forget that the internet is really not the anarchic free-for-all, anything goes place many folks would have you think it is..the mainstream internet is mostly run by Microsoft, Google (who own blogger and Youtube) and the News International Media conglomerate (who own Myspace and Sky TV in UK) these are some of the biggest companies on the planet and adverse publicity or complaints will affect their shareprice badly.
On the otherhand it could be argued that the internet is self-censoring, most of the major sites have a handy button nearby to flag innappropriate content or report abuse (which i agree with btw) but also i can imagine that some clean cut folks love nothing better than to flag up everything they dont agree with. Its quite democratic in some ways, but the sites often dont bother to check the content's offensiveness or otherwise, they just remove it, as a knee jerk reaction.Free speech advocates argue that the internet sees any kind of censorship as 'damage' and simply routes around it...hence the images are viewable on this blog or on many other websites now.
Bottom line is,I think we wont be making any more gore-inspired pics for any bands because they are more trouble than its worth.
Posted by Digby at 12:35 PM