where is the Teutonic Thrash?

Question: I think its great tha earache seems to have a representative of all the various styles of thrash bay area, LA, Skate, Brazilian well all except one Teutonic, are you actually looking for a band to fill this hole eg hellish crossfire? or is it the style of thrash thats not appealing to you due to it being less catchy than most of its genre cousions? From:

Answer: actually we tried hard to find a german representative when we did the Thrashing Like A maniac comp- because as you say, german thrash was very important in the original wave- Sodom, Destruction, Kreator are rightly hailed as Teutonic kings of Thrash, and are still going strong.Tankard aswell, they deserve credit for being Germanys most loyal thrash band, never splitting up.Pic right. 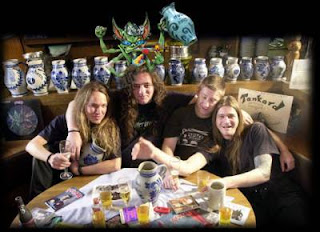 Beleive it or not - its very difficult to find decent proper NEW thrash bands in Europe.Having checked out Hellish Crossfire (pic at top) i dont see them as being a true thrash band actually- its more like mid-tempo black metal to me, much like Blood Tsunami or california's Witchaven.The only newish European band which is vaguely decent modern Thrash is Legion Of The Damned who hail from Holland and in the track Warbeast have a totally neck breaking slice of germanic-style thrash, it will blow your mind.
Posted by Digby at 1:29 PM