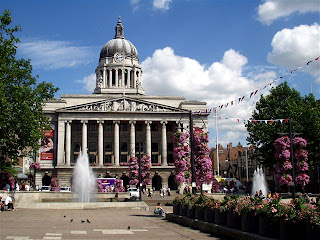 Question: Did Earache ever consider relocating during the early days? maybe to the anarcho punk hotbed of bristol or to brum considering napalm and alot of the scene were based there, this question came from the fact that i did the nottingham to brum run myself for the supersonic festival and well its not exactly convient, i could imagine it as chaos when your trying to run a business! From:

Answer: Yeah i know what you mean, Earache's early successful bands did spring from Birmingham and the label was founded and still is based in Nottingham, 50 miles away.I became very familiar with the train timetables in the early days when visiting the Mermaid on a weekly basis to watch Napalm Death gigs- the friggin last train back is something like 9pm which means an all-night stopover- y'know, to this day, the sight of New Street station gives me the chills, i have literally spent many grim, freezing nights in that place waiting for the early morning train, its not a pretty situation.If you went to Supersonic festival ( i was gonna see Scotch Egg at that but never went) at Birmingham recently from Nottingham via train you'll know what I mean, but if you drive its really a breeze on M42 to Brum, at night its empty, so you can be back home in 1 hr tops.As the label grew and bands like Napalm, Godflesh, Bolt Thrower became bigger, funnily enough it became a slight blessing being 50 miles away from the bands, as it meant meetings were less ad-hoc and more organized, more formal in a strange way, because a commute was involved.
The idea of re-locating the label to London is one all labels face- you undoubtedly suffer in this industry from being away from London, as its the hub of the music industry in UK, all the important press/TV/ media are there, and most gig agents, managers lawyers-its jam packed with key contacts- but i strongly resisted that pressure to relocate to London as i'm a proud Nottinghamian, and love living where i do- so i did the commute instead. Luckily the train to London is damn fast - 1 and 1/2 hrs - and convenient, you can even catch one back after a gig (just)-it beats the car hands-down, as parking in London is a rip-off nightmare.Again, one of the upsides of being based out of London is you avoid getting caught up in the London mindset and day-to-day whirl, where only things in London matter and everything outside of London is boring, provincial and small-time.
During Earache's explosive years in the early 90's, things really took off in the USA, and i was visiting New York a hell of a lot, if i was going to move the operation it would have been to NYC in the 90's. At one point in late 90's my passport ran out and I decided to count the number of stamps i had for JFK airport in NYC- it was 95 visits-thats in a decade. 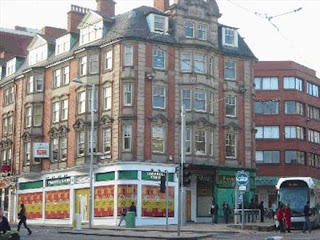 Nowadays Earache has a promotional office in London and a staffed branch office in New York, as well as in central Nottingham (see pic, we are on 1st floor)...and all the action takes place online now anyways so it doesnt even matter where you actually live or work any more.
Posted by Digby at 10:34 PM