New Wave of Thrash -its back and thriving... 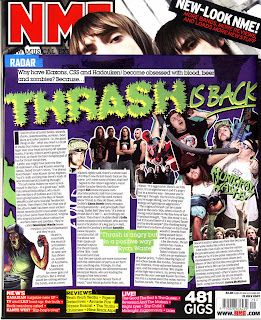 Question: has it suprised you how much this new wave of thrash has taken off? nme fodder bands have been photographed wearing new wave of thrash shirts for example gallows ( frank has been photographed in an sss shirt and also he played various warped tour dates wearing a earache thrash is king shirt) and klaxons ( guitar player photographed in an evile shirt), also was it suprising that the new bay area seems to be yorkshire of all places with evile, headless cross and the horror all coming from the area? From:


Answer: No its not a surprise that the bands are doing well - anyone who saw Evile entertain the Bloodstock festival hordes today (15 Aug 08) with continuous huge circle pitting and major moshpit action, even at the ungodly hour of 11.45am, and Muni Waste same thing at Download in June, can see that Thrash is the breath of fresh air people were waiting for.Its been a long time coming actually- in 2004 I signed Municipal Waste and Earache has pretty much been the only label to dare to single-mindedly promote and support any new bands considered 'Thrash' since then.People thought we were crazy, still do in fact, because the style was considered long-dead and was so far removed from the entrenched death-y growly-vocal metal output that has dominated the metal scene for as long as anyone can remember, well at least since early 90's. 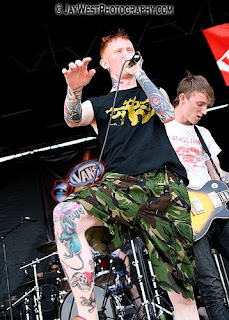 The main culprit which got the ball rolling was actually uber-trendy VICE magazine- it gave Muni Waste "Hazardous Mutation" an unprecedented 11/10 mark, which showed their impeccable taste in music, and from then on, with the VICE seal of approval, the other bigger mags slowly but surely picked up on it.
In early 2007 we put out an industry-only sampler CD & shirt called 'thrash is King' featuring Muni waste, Evile & SSS tracks to journalists & NME began to give coverage, and in the case of UK Metal Hammer, that mag went apeshit overboard with spectacular support of what we were trying to do.It was around about that time that Frank from Gallows started to sport a fetching SSS T, and actually at Donington 07 Frank more or less wanted my "Thrash is King' shirt off my back, so I sent him one and he sportingly wore it across USA on that summers warped Tour. He's genuinely into it,a top geezer.
As for Klaxons,for them its more an 80's fashion retro thing i guess, and I thought it was a Slayer shirt he wore,but if its Evile, thats mad eh? Got any pics?
Whats also noteworthy is the well-known social networking site Last.fm invited SSS to play their launch party in London, and local VICE mag hangout have SSS play seemingly every few months, which is strange as Thrash is by rights not trendy at all.None of the bands set out to to be the hipsters choice, it somehow ended up that way!And when the A-lister to end all A-listers David Beckham wears an EXODUS shirt, then its gone frighteningly too far! 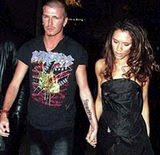 I'll tell you another NME-type band who worship old school thrash- Crystal Castles- so much so that i reckon soon a thrash act could tour with them, would'nt that be a bizarre tour, eh?
Lastly in 2008 we had the 'Earache Thrash Pack' launched on the ROCKBAND game which sealed the deal, and means i can now say: Thrash is certainly back and thriving, tho if you are an diehard fan of the genre its obvious it never really went away.
As for the Yorkshire connection, its weird how so many bands come from that area, i agree- must be sommat in the water up there eh?
Posted by Digby at 3:54 PM