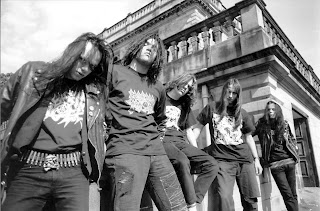 Question: Hey! I\'m reading the fantastic \"Swedish Death Metal\" book, and was intrigued upon reading the chapter which discusses the release of \'Left Hand Path\', to hear that you have the unmsatered version of the album without vocals. Since you spoke highly of that version (according to the quote in the book anyways), I wondered if it would ever see the light of day..perhaps as bonus material on some future reissue of LHP? I know I\'d darn well kill to hear it! From: xheartsonfirex@fsmail.net

Answer: I've not had chance to get this book yet, but no doubt its fantastic, Daniel knows his stuff and was there from the beginning so is the perfect person to write this. He is bassist in INSISION if ya didnt know, making 2 albums on Wicked World for Earache.Now its in English language there is no excuse for any respecting Death heads not to grab this tome.
As for Entombed- from memory I think I was raving about the feeling i had when I first received the Left Hand Path rough mix.I can still remember the chills it sent down my spine, the shock of hearing something so radical and new and ultimately a sound that changed the course of the heavier end of metal.Apart from the band in the studio, i was the first to hear it, and the realisation that this, the 'Sunlight Sound' - even without vocals -was undoubtedly going to be a 'game-changer' is what I meant.That album hit me hard, damn hard. The rough version is heavy on the guitars and no vocals, its not a definative or alternate version or anything,its just a rough mix- beleive me, the final CD is much better.

heres a preview video of the book:

I also have a copy of this that Uffe sent me shortly after they recorded it.